Who we are and what we do

BAU Clinic was inaugurated in 1992 in Cordoba (Andalusia) as a clinic specialized in gynecology, obstetrics, and assisted reproduction. It comes into being with the purpose of offering women in the different stages of their lives medical assistance and providing solutions to their necessities and problems that may arise.

What do we do?

We bring more than 500 babies into the world every year. We perform more than 5,000 pregnancy ultrasounds. We are a reference centre of high-risk pregnancy.
We have the highest technology on diagnosis and pregnancy monitoring

The first baby born by in vitro fertilisation in Cordoba was born in our clinic in 1992. Since then, more than 2,500 babies have been born with us thanks to Assisted Reproduction Techniques. We are capable of ruling out genetic diseases in embryos by means of pre-implantation genetic diagnosis.

More than 30% of our assisted reproduction patients visit us because of failed treatments in other centres having satisfactory results. We have the latest technology in diagnosis, treatment, embryo culture, and gamete preservation: Embryoscope.

We perform more than 25,000 ginaecological revisions every year. Our menopause unit sees more than 5,000 women.

Our team from the oncological unit see more than 700 women every year. We perfom more than 1,200 ginaecological surgeries every year.

In BAU Clinic we make available a wide range of specialties that will help and guide you to solve problems arising from other processes or pathologies that you may suffer throughout your life. For this reason, we make available a range of women’s care in which you will have an excellent team of specialists: general surgeons, plastic surgeons, cosmetic surgery, psychology department, urology, endrocrinology, proctology, general medicine, etc.

All with the guarantee of BAU Clinic

Do you know where the BAU Clinic name comes from?

Baba or Bau, in Sumerian and Akkadian mythology, lately named Ninisina or Gula, is the goddess of healing and tutelary deity of Lagash, daughter of the mother goddess Gatumdu and, therefore, granddaughter of the Sumerian supreme pantheon who she sometimes called “father” when referring to him (which can give rise to some misconception). She probably had a local origin as a mother goddess and she was also called “Lady of abundance” for controlling animals and human beings’ fertility.

She was the wife of the god of war, Ningirsu, with whom she had seven daughters, including Hegir-Nuna (Gangir).

Her name, meaning “bark” or “guau” (bau), has probably an onomatopoeic origin as the bark of a dog and, sometimes, she was represented with a dogs’ head. Texts found in the ruins of Lagash, dated back to the reign of the reforming Urukagina (2364 – 2342 a. C.), reveals that his wife Sasa conducted business on behalf of “goddess Baba’s House or Temple”.

The king of Lagash, Urbaba ((Ur-Baba, “the man of Baba”) took his name in honour of the goddess. Later on, the kings Urukagina and Gudea (who was called himself “son of Baba”), gave her a preferential treatment in the worship. As Ningirsu’s wife, she was also worshipped in Girsu. 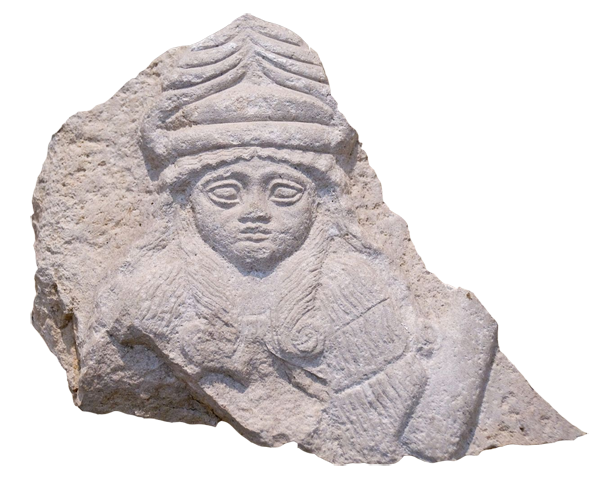